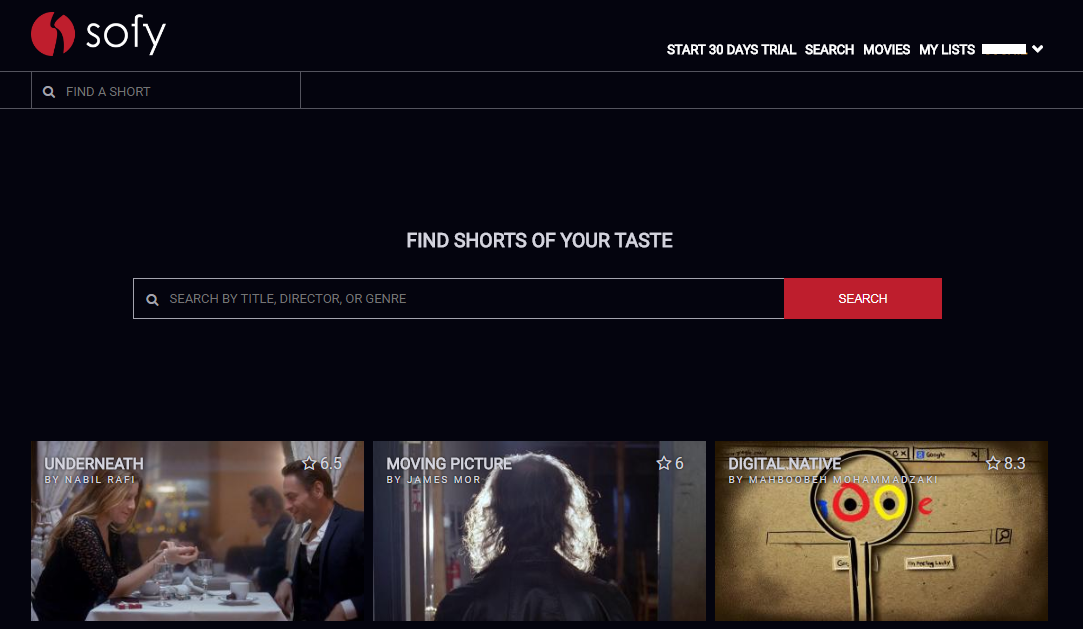 Spurred on by the success of mainstream streaming sites such as Netflix, the team worked tirelessly to make their dream a reality. Finally, earlier this year came the official launch of Sofy.tv.

The platform has already generated a huge amount of interest from both film enthusiasts and filmmakers everywhere.

While members race to try to watch as many of the site’s 200+ short movies as they can, filmmakers continue to grow the site’s catalog by submitting their films. The result is the perfect equilibrium whereby the more members who join, the more filmmakers who hear about the site and send in their films.

For any filmmakers wishing to join the Sofy.tv revolution, you can enter your film by heading to the site’s submission page.

Why Do We Need Sofy.tv When We Have YouTube?

The advent of YouTube and other streaming sites did a great deal to help solve the distribution problem that overshadowed short films for decades. Provided filmmakers were happy to allow viewers access to their films for free, they could at least get them seen.

While giving away all their blood, sweat and tears for free might seem unfair, this was the only real way to get larger audiences to see their films. Filmmakers could at least now hope to use the viewing figures from their YouTube channel to raise funding for their next film.

While it has been amazing to see the explosion in the number of people making short films recently, it has had two unfortunate consequences.

While this is a double sided coin, the sheer volume of short films on YouTube (80 million and counting) has made even the act of finding a suitable film a gigantic task. Unless you know the film title or director’s name, it can be a nightmare to find a good film on such a platform.

The flood of short filmmakers uploading content has led to another phenomenon that I call the 1-minute video syndrome. Increasingly, filmmakers are vying for audience numbers so concentrate on making shorter films that can be watched at a glance. Typified by the 1-minute video, this has led to films focusing on making short sharp points in place of story development etc.

Into The Ring Steps Sofy.tv

The great thing about Sofy.tv is that it rewards filmmakers as and when their films are watched. The creators also review every film prior to making it available on the platform to ensure that it reaches the artistic standards required.

After a film has been approved, it is then added to the site with a plot breakdown, quality rating, and genre categorization. All of this information is included solely to make the process of finding the right films easier for users. The site also has a great search engine and recommended section to improve the user experience.

Members can be sure that they are getting access to the finest short films available, and in the best possible viewing quality too.

If you wish to subscribe to watch all these great films, head to Sofy.tv now.

New Releases On Sofy.tv This Week:

Directed by Octav Chelaru, Black Clothes is a fascinating exploration of morality in the real world. Set in Romania, the film examines one elderly orthodox priest’s battle with morality. Having spent a lifetime preaching against sin from the pulpit, the priest is forced into a situation where he too is considering committing sinful acts to protect his misbehaving son.

The film stars William Hochman and Isabella Conrad in a comedy tale of a band guitarist by the name of Jack who has to get to a gig. Little does Jack know that his drunken roommate and envious girlfriend are going to do just about everything they can to get in the way of him getting there on time.

After discovering that his jealous girlfriend has just thrown his electric guitar into the bath, Jack finds himself having to negotiate with his roommate to loan his one. Rather than agreeing immediately, his roommate begins telling a series of pointless stories that only frustrate Jack by wasting more and more precious time.

If you are interested in reading about last week’s Sofy.tv latest releases, then you can do so by clicking this link. Alternatively, head to Sofy.tv and find out the most popular films by signing into your account.

Thanks once again to the great team at Sofy.tv for ensuring that we can now all enjoy so many fantastic short films.