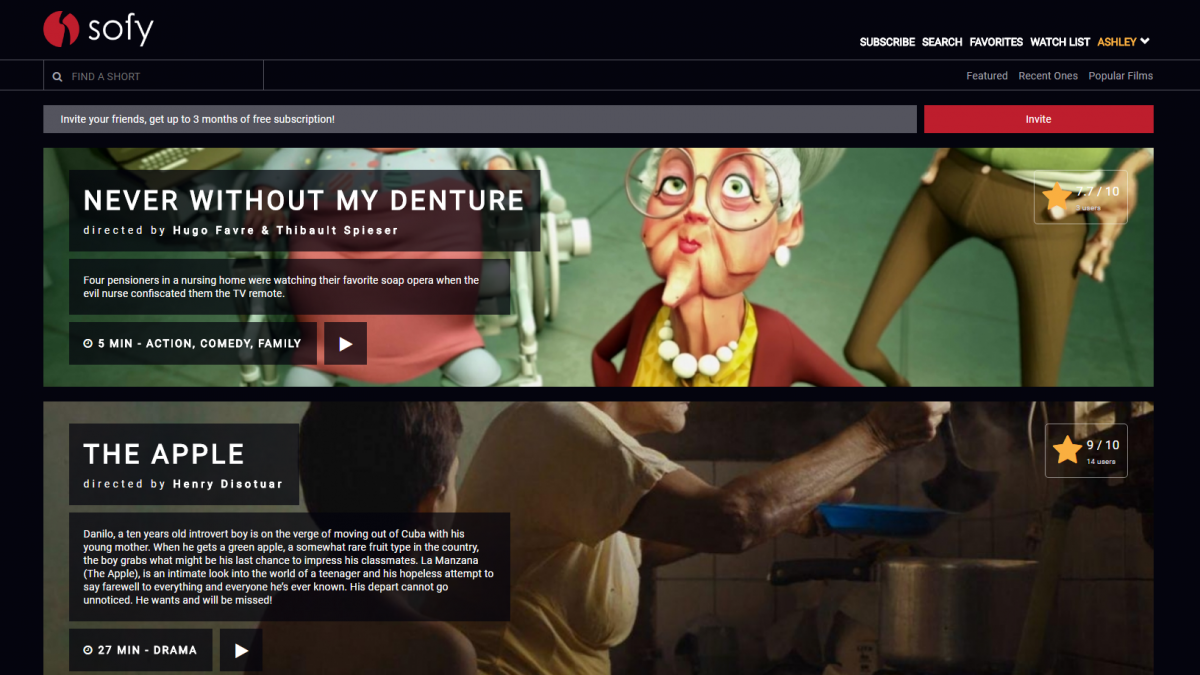 The launch of Sofy.tv during the Cannes Film Festival heralded the rebirth of short films.

It is now possible to watch many of the greatest short films ever made just by signing up to their site.

Why do we need a dedicated short film site so badly?

If you need an answer to this question then just take a look at Netflix. This global live streaming platform has grown so big and successful that it now aims to ensure that more than 50% of its catalog will be Netflix originals.

The interesting thing about Netflix is that, for many years, the company actually lost money. Founder and CEO Reed Hastings actually approached the Blockbuster video chain offering to sell them the site. Blockbuster famously rejected an offer of $50 million for the site, a business decision that would haunt them until the day they closed their doors for good.

The common misconception about short films is that there is no market for them. For years, the film industry has ignored shorts on account of their inability to monetize them.

There have been a few high profile exceptions, however. As this list of the top grossing US short films of all-time shows, audiences are happy to watch short films when they are marketed and distributed in the right way.

To prove my point, just look at how well the Best Short Film nominees at the Academy Awards perform when compared to their non-nominated siblings. The winner of this award can expect 100,000’s if not millions of people to view it, whereas a film that hasn’t won any awards will be lucky to get figures in the 10,000’s.

The simple fact is that people can and will watch short films if they know about them. This is where Sofy.tv comes in.

What’s so special about Sofy.tv?

The great thing about Sofy.tv is that it is a site dedicated to short films. This means that unlike with many of the other streaming sites, the team behind Sofy.tv is entirely focused on building the best short film catalog possible.

Never Run Out of New Films to See

Why is this so important? Well, firstly it means that the site’s catalog will constantly be growing. The trouble with non-dedicated short film sites is that they tend to neglect their short film sections in favor of concentrating on their feature-length film and TV content.

However, the team at Sofy.tv is dedicated to getting as many new titles added every week as possible. This means that even the most hardcore short film lover won’t be able to run out of films to watch. Every week in excess of 10+ films are added and this figure is growing all the time.

Only the Best Movies for Sofy.tv Members

Sofy.tv was the brainchild of the team at Largo Films. This team is staffed by short filmmakers and enthusiasts who are passionate about short movies. As a result, all of the films on the site have been scrutinized by several members of the team to ensure that they are deserving of entry.

The long-term goal of the Sofy.tv team is to instill a passion for short films into a new generation of movie lovers. To achieve this, they understand that ensuring quality is vital. Every movie hosted on Sofy.tv is of the highest possible quality.

In order to submit their films, filmmakers must send an HD copy to ensure Sofy.tv audiences only get the best possible viewing experience.

Sofy.tv is available for just $5.99 per month. This is a staggeringly low price considering that their catalog already consists of more than 250 top short films.

Not only is it very inexpensive but you get the following features to help make your search for those great shorts as easy as possible:

The most obvious advantage of Sofy.tv over rivals like YouTube is that it has a sophisticated search feature that allows users to quickly find the films they want. Users only need to search by movie title, director name, or by genre and they will find exactly what they are after.

Every aspect of the user interface operates in a way that helps to enhance the user experience. Films are displayed with a cover photo and include a description detailing everything from running time to a quality rating.

The site’s user interface also includes a number of suggested films that are either the most recent releases or popular with other users. If you are not sure what you want to watch then this is a very welcome feature indeed.

Save Your Favorite Films to Watch Time and Time Again

There is nothing like finding a film that you love and getting to enjoy it over and over again.

Sofy.tv helps make this an even better experience thanks to their handy favorites feature.

If you like a movie, just add it to your favorites. When you want to watch it again, you just need to head to the favorite’s page and it will be right there and ready to roll.

Sofy.tv is a Learning Site

There is nothing better than heading to a site and finding everything you like right there on the homepage.

Sofy.tv uses complex algorithms to learn from the choices you make. This way the site will eventually be able to recommend all the most suitable movies to suit your particular tastes.

While sites such as YouTube and Amazon already use similar algorithms, finding such a feature on a newly released site is extremely rare.